Hidden behind the facade of a refined French nobleman from the 15th century lived one of the most infamous sexual criminals in all of history, Gilles de Rais. His story is that of a squandered life par excellence, of a life devoted to extreme violence and guile. As a wealthy and influential man of his time, he possessed great power, all of which he used to maintain a lifestyle filled with senseless extravagance and degenerate enterprise. Following his notable existence of privilege as a distinguished military figure and the marshal of France, it’s hard to imagine how it all ended in a storm of accusations around abduction, pedophilia, murder, and heresy. Looking back through the dark annals of history, it’s nearly impossible to find a figure as disturbing as Gilles de Rais, a fact that stands as testament to the level of depravity and deviant ambition he reached during his heyday–and a fierce reminder that, when it comes to people, things are not always what they seem.

Born in 1404 to a noble family in Champtocé, France, Gilles was heir to a vast family fortune that included several castles and tracts of land. In keeping with expectation, he married a rich heiress, Catherine de Thouars, in 1420 where he lived a lavish lifestyle fit for a king. Not long after his marriage, he joined the fight in the wars of succession to the duchy of Brittany and later fought for the Duchess of Anjou against the English. During his time on the battlefield, he became an accomplished lieutenant and was given the task of guarding Joan of Arc herself, fighting several battles by her side. He accompanied her to Reims for the consecration of Charles VII, who then made him marshal of France, and continued to serve as her special guard until she was captured in Paris, at which time he retired to his lands in Brittany.

In the year 1435, as his military career was winding down, Gilles withdrew from public life in pursuit of his own interests, constructed a splendid chapel on his property and produced great theatrical spectacles, generating considerable expense on costumes, actors, and sets. At the time of his last production, he had sold all but two of his castles and was close to bankrupt. At this point, his family members united against him and appealed to the king to restrict his behavior.

In accordance with their request, Gilles received a decree from the king of France, limiting him from selling or taking any further loans out on his lands. Irritated by his circumstances, he became sullen and was rumored to have dabbled in the occult as a way to gain knowledge, power, and riches, even invoking the devil as a way to vanquish his enemies. Apparently, these preoccupations with the dark side led him into a dispute and physical altercation with a priest during the celebration of mass one evening, and as a result of his public insults towards a respected religious figure, Gilles was arrested and brought to trial before an ecclesiastical tribunal. Although prepared to try him for the relatively light crime of assault, the court was in for a shock when far more heinous activities were discovered, ones that had been going on in secret for many, many years.

Although there are conflicting records on this account, it is agreed that Gilles did eventually admit (albeit under pain of torture) to an appalling history of violence against children and extreme sexual depravity. Based on his own account, the murders first began back in 1426 when Gilles was fighting in the French army. Given his status, he had many loyal servants who would bring him child victims from time to time–easily found playing in the countryside of nearby villages. Ranging from ages six to eighteen, Gilles’ victims were estimated in the hundreds. Yes, hundreds.

In his court confessions, Gilles recounted nights of unimaginable debauches, all of which would end in the death of the unfortunate youngster. In a 1971 biography of Gilles, the author illustrated the circumstances of his first murderous encounter. “The boy was pampered and dressed in better clothes than he had ever known. The evening began with a large meal and heavy drinking, particularly hippocras, which acted as a stimulant. The boy was then taken to an upper room to which only Gilles and his immediate circle were admitted. There he was confronted with the true nature of his situation. The shock thus produced on the boy was an initial source of pleasure for Gilles.”

In later courtroom accounts, Gilles himself described how he and his malevolent assistants would “inflict various types and manners of torment; sometimes severing the head from the body with dirks, daggers, and knives, sometimes striking them violently on the head with a cudgel or other blunt instrument, sometimes suspending them with cords from a peg or small hook in his room and strangling them; and when they were languishing, committing the sodomitical vice on them,” either before or after death. It seemed his preferred victims were young boys, although he was known to accept a girl if nothing else could be found, suggesting what many believed were deep-seated homosexual tendencies looking for release. Gay or not, his behavior was more likely the result of a disturbed psyche gone haywire, a serial killer mentality that knew no bounds and found decadent release in an unsuspecting world.

One of the most horrific elements of his crimes seemed to be his bizarre fascination with the heads of his victims, speaking to his extreme aesthetic tastes. He would gaze upon his victims with the eye of a connoisseur, remarking on the ones with the finest skin or the loveliest limbs. What made this particularly sickening was the fact that the heads were often separated from their bodies at the time. He was believed to have kept the most handsome decapitated heads, kissing them with adoration and appreciating the childlike look of wide-eyed fear frozen on their faces. Obviously enthralled by the act of dying, Gilles was aroused to erotic perversion through these acts and would often watch the life drain from his victim at the exact moment  he found sexual release, a feeling that would serve as a perverse consecration of his crime.

The nobleman’s tastes were not for the faint of heart. In his court confession, Gilles recounts how he and his trusted manservant, Poitou, would molest the boys in various ways, all the time comforting the terrified children with assurances, and once the seed was spilled and the crying became tedious, they would kill them by decapitation, slitting their throats, dismemberment, or breaking their necks with something heavy. Gille kept a special short, thick double-edged sword known as a braquemard on hand for such moments. According to Poitou’s testimony, Gilles ironically had great disdain for the sexual organs of his victims and took infinitely more pleasure in debauching himself than raping the boys. Thank God for small favors.

With plenty of time to spend on his lethal hobby, the violence continued for many years as countless children were procured, raped, killed, and then burned carefully in the fireplace of Gilles’ room. The victim’s clothes were fed to the fire piece by piece so they burned slowly, keeping the smell to a minimum.

Obviously consumed by his vile occupation, Gilles’s lands and wealth dwindled greatly during this time, leaving him on the verge of ruin. It was then, during his financial difficulties with the king, that he turned to the occult to rectify his station. He seemed to believe that such loyalty to the dark side was enough to bring about the improvement of his condition, although for all his bloodlust, Gille was a gullible coward when it came to the black arts and could never bring himself to sacrifice a human to the devil. Instead, he would give his loyal servant, Prelati, who claimed to understand the demons, the eyes, hearts, and members of his victims as tokens to appease the underworld. Through these grotesque gestures, he hoped to win favor with the demons without directly committing his own soul, again a sign of his extreme cowardice.

On October 23, 1440, the secular court heard the confessions of Poitou and condemned both him and Gille to death immediately. Unlike the tedious appeal process faced by criminals today, execution in the dark ages came swiftly, and the men were hanged and then burned within two days. On the Ile de Biesse, Gilles is said to have addressed the crowd with a contrite apology, reassuring his partner in crime Poitou to die bravely with the goal of salvation. Gille had asked to be the first to die, and so, promptly at 11am, the brush at the base of the platform was set on fire and he was hanged by the neck until dead. Because Gille was still a nobleman, after all, his body was cut down before being consumed by the flames and “four ladies of high rank” took it away for a proper burial in the church of the monastery of Notre-Dame des Carmes. Poitou, on the other hand, was a just a commoner–thus, the crowd was allowed to watch his corpse be reduced to ash. 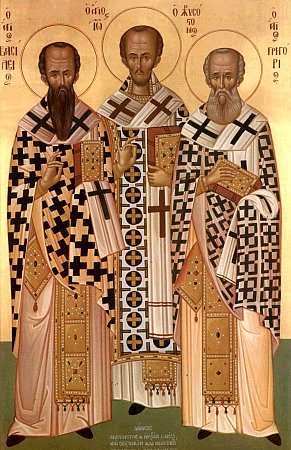 Despite his confession and subsequent conviction, there has been some speculation about whether Gille was, in fact, guilty of such heinous crimes or perhaps himself the victim of an ecclesiastical plot or act of revenge by the Catholic Church or the state of France. The Duke of Brittany, who had a key role in the prosecution of Gille, received full title to the remaining de Rais lands and was able to divide the property between his own nobles. This fact cast considerable doubt upon the integrity of the proceedings, a theory which as been further explored in the writings of some authors and secret societies. 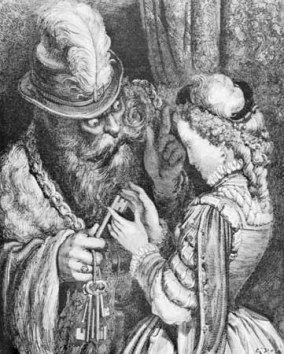 With a story this sensational, it’s no surprise Gilles’ life became the fodder for a frightening French folktale famously known as Bluebeard. Written by Charles Perrault and first published in Paris in 1697, the tale tells the story of a violent nobleman whose young wife accidentally stumbles upon an underground chamber in their château where he has collected the mutilated corpses of his past wives. The young woman tries to flee Bluebeard but is caught and just when she is about to die, she is saved by her family. While the fairy tale itself has a happy ending, the same cannot be said for the notorious life of Gilles de Rais.