When it comes to American history, there is no landscape more breathtaking and dramatic than the great frontier. The late 18th century was an unparalleled time of discovery and violence when the New World was busy forging itself through the bloody conflicts of its people. Massive, uncharted, and full of possibility, life as a pioneer provided endless opportunity to men with vision and plenty of leeway to the brazen and lawless. Although history tends to focus on the adventures of heroic pioneers like Daniel Boone and James Smith, there were plenty of dastardly frontiersmen who used the remote wilderness to camouflage their crimes. And in that darker category, there were none—none—quite as terrifying and destructive as the notorious Harpe Brothers.

Emigrating from Scotland as children, the Harpe clan finally settled in Orange County, North Carolina in the mid 18th century. Although the two boys were actually cousins, they grew close over time and eventually became known as Micajah “Big” and Wiley “Little” Harpe because of their difference in size. In 1775, the two young men left their homestead and headed to Virginia where they hoped to find lucrative jobs as slave overseers. They loved the idea of striking out on their own in search of adventure and money, but they relished the possibility of whipping some slaves even more.

After a long reign of terror, the Harpes would eventually confess to killing 39 people, although history believes the number was likely closer to 50. The stories behind their exploits are largely supported by documents and written accounts, making their lives some of the most astonishing in frontier history. Like most outlaws, their heinous misdeeds eventually caught up with them, but not before they were able to wage a godless campaign against the innocents of the territory, often killing women, children, and even babies for sport. When a well-known man named Johnson was found in the Holston river with his chest ripped open and filled stones, the folks of the frontier would begin to take notice of the roving pair, and his death would become a sickening signature of these frenzied killers. They cut their teeth fighting with the British military and roving with the Indians, experiences that only strengthened their bloodthirsty ways.

Frontier life was well-suited to the Harpes and offered the perfect environment for their brutal whims and wishes. The backwoods of Kentucky and Tennessee in post-Revolutionary times, where the men spent much of their lives, were notoriously rough and lawless, once described as a place where “the Devil, old and worn out, had given up traveling and settled in so that he could spend his declining years with like-minded people.” They could drink, swear, gamble, fornicate, murder, pillage, rape, and basically terrorize anyone who crossed their path with zero accountability or legal repercussions. It was a bandit’s paradise, and the Harpes took full advantage, eventually earning the dubious distinction of being the first compulsive killers in America.

As the Harpes headed off to find employment in the slave trade, their well-laid plans were unexpectedly disrupted by the start of the Revolutionary War. Because siding with the British gave them an opportunity wreak havoc on the American frontiersmen, the pair were soon busy burning farms, raping women, murdering innocents, and pillaging homesteads. They helped themselves to the property of the Patriots under the guise of loyalty to the King, but their motivations were rooted only in greed and the pleasure afforded by violence. In 1780, the Harpes joined the British troops in battle along the borders of the Carolinas where they fought vigorously for the sake of fighting—true vigilantes of nothing—and miraculously, were never injured in battle. But when Little Harpe tried to rape a girl during a raid, he was shot and wounded by her father, Captain James Wood, on whom he vowed to take revenge. 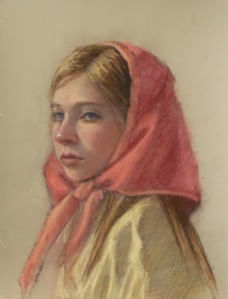 When the fighting between the two sides died down, the Harpes became bored with peace and joined a group of Cherokee Indians who had been raiding settlements in North Carolina and Tennessee. While marauding with the natives, they found an opportunity to visit the homestead of Captain Wood once again, where they kidnapped his daughter, Susan Wood, and her friend, Maria Davidson, and forced them to become their wives. The pair, then traveling with four other men, took the poor women on a journey down to the Tennessee, brutalizing them horrifically along the way. The wretched state of Susan and Maria was so severe, it eventually drew the concern of one man in the gang named Moses Doss who was promptly killed by the Harpes for his interference in their personal business.

Later that year, in 1781, when the British surrendered at Yorktown, the men settled down with their “wives” in Nickajack, an American Indian village established by the Cherokee and Chickamauga Indians near present-day Chattanooga. As the story goes, the women each bore the Harpes two children, but the men were not cut out to be fathers. They were stone-cold killers, plain and simple, and most of the children never made it through the first year of life. For 12 years, they continued to help the Indians fight the American Patriots and even partook in the Battle of the Blue Licks in Kentucky, 1782. But the brothers had no real loyalty to anyone, and when they discovered the Americans planned to attack the Indians at Nickajack, they didn’t stick around to protect the village; they took off with their women for safer ground, eventually settling in a cabin on Beaver’s Creek near Knoxville, Tennessee. It seemed things were mellowing for the two men—they had a homestead of their own (where they stole supplies from local pioneers), and Little Harpe even married a local minister’s daughter named Sarah Rice, but this would, in fact, mark the beginning of one of one crazy killing spree.

Their violence knew no bounds. Thomas Lankford, A man who once tried to help them, was robbed and murdered by tomahawk for his efforts, a crime for which the men were arrested in Hustonville, Kentucky on Christmas Day, 1798. Always cunning and tenacious, the men soon escaped from jail just a few months later and continued their tirade. As local folks began to take note of the Harpes and their reign of terror, a posse was assembled by “Devil Joe” Ballenger and a bounty placed on their heads. 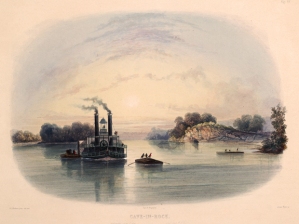 There were plenty of other outlaws hiding in the wilderness of the great frontier, but none quite as dastardly as the Harpes, who were now being aggressively pursued by the pioneer posse. Finally making their way to the rock caves of southern Illinois, the two men and their women joined a group of river pirates under the leadership of the notorious Samuel “Wolfman” Mason and began preying on slow-moving flat boats sailing along the Ohio River. But the Harpe boys—who were known to take travelers to the top of the bluff, strip them naked, and throw them off—were too much to handle, even for Mason, and soon overstayed their welcome in the pirate camp.

Despite their roving existence, the men never tried to hide their crimes. While staying at a lodging house, Big Harpe smashed a fellow traveler’s head in for snoring too loudly and then proceeded to kill the proprietress and her infant son, burning down their house when he was finished. They returned to eastern Tennessee where they killed a farmer named Bradbury, a man named Hardin, and a young boy named Coffey. In south central Kentucky, John Graves and his teenage son were found mutilated in Logan County, and an entire family who had apparently been asleep in their camp were found massacred.

As their crimes continued to stack up, so did the forces against them, and the posse soon tracked the men to their location, forcing them to ride off in separate directions to escape. The pursuing men on horseback followed Big Harpe who tried in vain to outrun them and was shot off his horse by a posse member named John Leiper. Being the deranged maniac he was, Big Harpe did not give up when his rifle misfired and fought with his trusty tomahawk until he was finally overpowered. Before he died, he confessed his one regret—killing his infant daughter whose head he had bashed against a tree when she wouldn’t stop crying. The men then shot him through the heart and cut off his head, his body left in a spot near the town of Graham, Kentucky, still known as Harpe’s Hill. Frontier justice was finally complete when his head was nailed to a tree by the fork in the road near Highland Lick, a spot marked today by Route 41A near Dixon, Kentucky.

Of course, with the amount of violence surrounding the vicious Harpes, it’s no surprise a dark legend has sprung up around their story. At some point before his death, Big Harpe was traveling along the Natchez Trace with an Indian guide who showed him a sacred area where the Chickasaw and Choctaw people had buried the bones of their ancestors. It was believed this place was steeped in superstition and had been used by witches in nighttime ceremonies. They would feast and dance throughout the night, scorching the earth bare with their wicked feet. During the War of 1812, all Indians avoided the cursed ground, and the barren, dry spots were even noted in the journals of Andrew Jackson who traveled the Natchez frequently. When Big Harpe heard the story, he only scoffed and began to leap between the cursed spots, daring the witches to take him. Of course, nothing happened that day, but when his severed head disappeared after his death, it was believed the witches had taken the skull and ground it into powder, to be used in some sort of potion. Word spread throughout the region, and many people began to avoid the area—but those brave enough to venture close reported hearing crackling laughter coming from the woods nearby.

As for the unfortunate Harpe women who had been violently ripped from their homes, dragged through many bloody confrontations, raped into submission, forced to birth several children only to see them murdered, and confined to daily life with some of the most heinous outlaws in history, they were now free. But despite their ordeal, they were soon held accountable for some of the more high-profile murders committed by the Harpes. Of course, even obtuse frontier justice soon recognized the women were basically victims themselves, and they were released within the same year. A testament to the resilience of pioneer women, both Susan Wood and Maria Davidson went on to marry real husbands, raise large families, and live respectable lives in peace.

Unlike his big brother, Little Harpe was not killed that day and escaped back to the secret caves in Illinois where he hid for another four years. Fortunately for him, the pirate boss Samuel Mason was an even more unpopular man in the region who now had a sizable bounty on his head. Always the opportunist, Little Harpe, along with a fellow ne’er-do-well named James May, murdered the pirate chief (or possibly just took advantage of his already dead body) and chopped off his head to collect the reward. 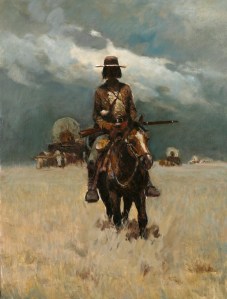 By this time, Little Harpe had assumed the alias of John Setton and felt confident he could collect the bounty with no problem. But he miscalculated and was immediately apprehended by local authorities the moment he showed his face in town. On a cold day in January 1804, Little Harpe and James May were publicly executed and their severed heads placed on stakes along the Natchez Road, another bloody warning to the outlaws of the great American frontier.