››”Roberts himself made a gallant figure, at the time of the engagement, being dressed in a rich crimson damask waistcoat and breeches, a red feather in his hat, a gold chain round his neck, with a diamond cross hanging to it, a sword in his hand, and two pairs of pistols slung over his shoulders …”

If there’s any love in your heart for the dark history of the ocean, you’ve likely heard the name Dread Pirate Roberts before. And while the name may be notoriously forbidding, the man himself is largely a work of fiction. But in the dark halls of history, there was a real man with the same name, Bartholomew Roberts, who really did sail the high seas with piracy in his blood, cutting a flamboyant and brutal figure amongst his scurvy crew. Driven by the same fierce lust for riches and revenge as even the most legendary dark mariner, the real Captain Roberts was a genuine swashbuckler who swung his cutlass mercilessly and painted the Atlantic Ocean red from Canada to Madagascar. His three-year career as the most illustrious pirate ever was fast and furious, filled with plunder, conquests, and a whole lot of mutinous mayhem. 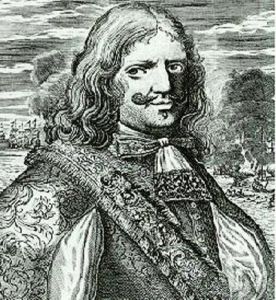 Collectively, we often imagine pirates to be eccentric deviants with hooks for hands and an affinity for other people’s belongings. In truth, they were opportunistic sailors who exploited the rise of valuable cargo being shipped around Europe and Africa as the slave trade and overall industry thrived in the New World. The training and experience many sailors had gained in the beginning of their lives gave way to a dark ambition when widely unprotected shipments of incredible treasure began to appear on the horizon. From about 1650 to the 1730s, this time became known as the Golden Age of Piracy, when the getting was good and the good were got. It was characterized by the buccaneering period of the Anglo-French seaman who loitered around Jamaica and Tortuga, attacking Spanish ships and generally making a nuisance of themselves. And the movement was accentuated later in the early 18th-century when Anglo-American sailors and privateers were left unemployed by the end of the war of the Spanish Succession and turned en masse to piracy in the Caribbean as a way to make a living and earn reputation. It was during this time that piracy knew its greatest and most glorious days when treasure was vast and the notion of seafaring crime was still in its infancy, giving these devious souls the wooden leg up on proper voyages. 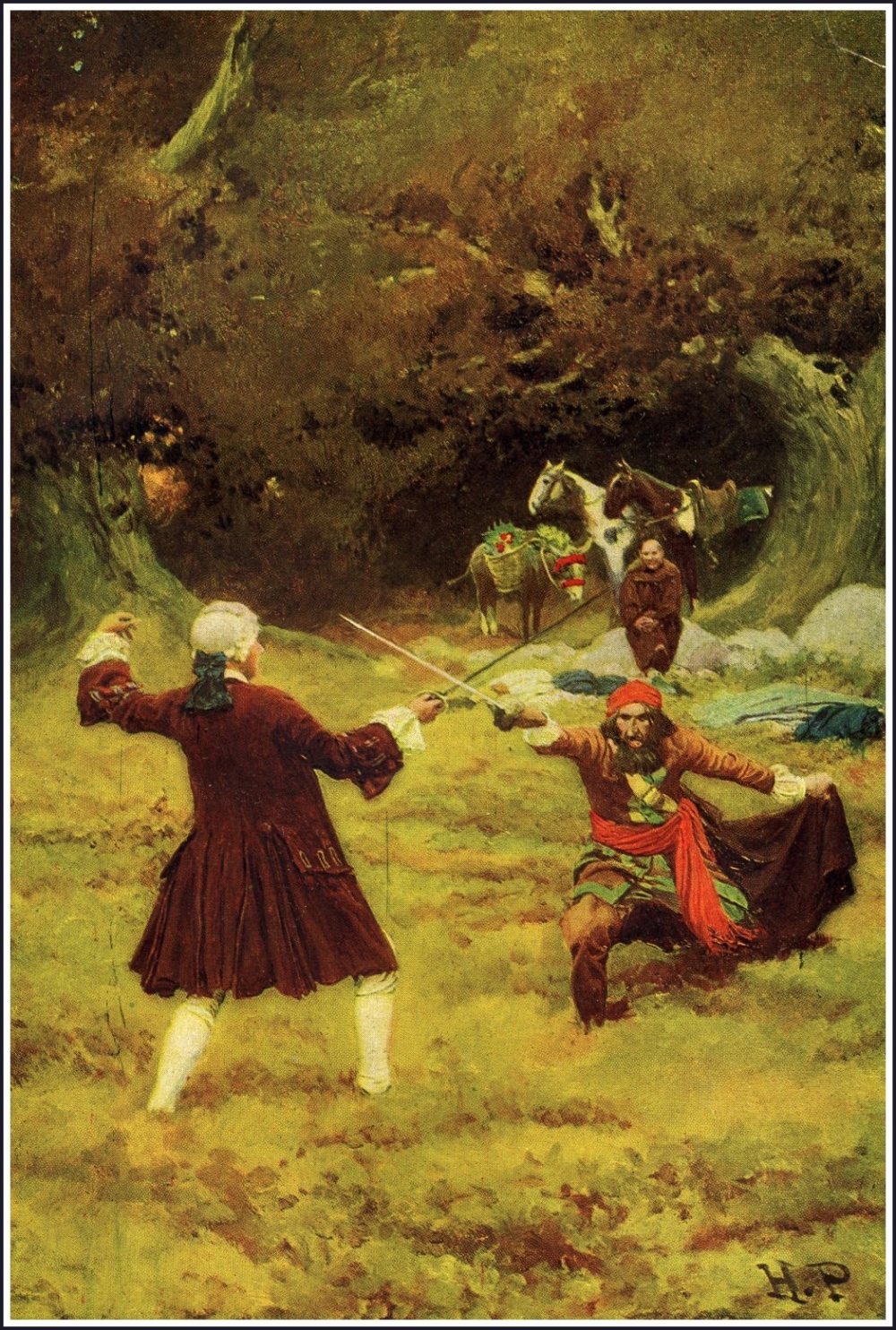 Born John Roberts in 1682, one of the greatest pirates to ever raise the jolly roger began his life in the quaint, quiet town of Pembrokeshire, Wales. Not much is known about his early years, although he is thought to have first gone to sea at just 13. He spent the next  24 years learning the ropes of sailing and likely taking a whole lot of angry orders from surly seafarers. His life came back on the radar in 1718 when he joined a sloop in Barbados as a deck hand. No one knows exactly why young John changed his first name during that time, but some say it may have been the result of his admiration for a well-known buccaneer named Bartholomew Sharp.

Roberts’ first foray into the world of pirates began the following year when he was given work aboard the slave ship Princess as the second mate. The ship was anchored off the Gold Coast of West Africa, in what is present-day Ghana, when it was overrun by two pirate ships, the Rover and the Saint James, both led by Captain Howell Davis. Davis, like Roberts, was a Welshman hailing, indeed, from the very same town, and this bizarre coincidence delighted Captain Davis who immediately took a liking to Roberts and adopted him aboard his pirate ship.

Although Roberts had been working on the high seas most of his life and sailing under the brutal command of a slave ship captain, he had always sought the life of a legitimate sailor and was initially resistant to the idea of joining Davis’ motley crew. But then again, he was only making about £3 per month with no chance for promotion to the captaincy. And then, we are talking about brutal pirates here, so of course, he really had zero choice in the matter.

Much to his delight, Davis soon discovered Roberts had mad skills as a navigator, having been a former nautical officer, and a wicked temper to boot, qualities that earned him a great deal of respect among his new comrades. 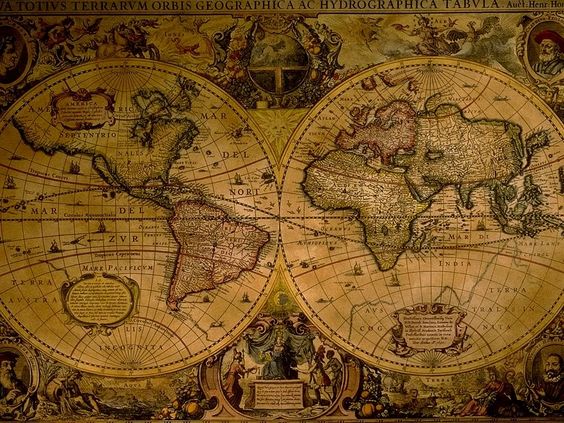 Just a few weeks into the voyage, Roberts proved himself immediately valuable when he helped Davis launch a successful attack on a passing Dutch merchant ship that just so happened to be carrying the Governor of Accra and his personal cache of 15,000 pounds worth of silver. It would be, hands down, the biggest haul in the history of piracy and a sign of Roberts’ instant success as one badass marauder. 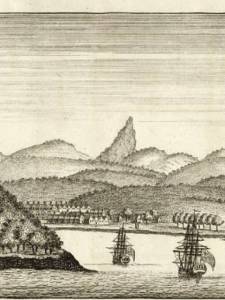 Not long after that, Captain Davis decided to stir up trouble on the Portuguese island of Principe, a small port just off the southern coast of Nigeria. So, the pirates hoisted the British flag and were granted access to the harbor. Intending to take the Governor hostage, Davis and his crew of bandits concocted a plan to capture the Governor by posing as pirate hunters offering assistance. Once they nabbed the powerful man, they could demand a hefty ransom. The plan was a miserable failure, however, as the Governor had somehow gotten wind of the pirate plan. Davis was ambushed during the attempt and shot dead on the spot. It seemed a new captain was an order, and with only six weeks on the job, Roberts’ popularity as an opinionated and bold sailor earned him the coveted spot.

In true pirate fashion, Roberts’ first order of business was to bring fiery revenge down on the heads of those who had killed his captain. So, landing again on the island in the pitch of night, the pirates stormed the town and killed as many men as they could find, throwing the fort’s cannons into the ocean and setting three Portuguese trading ships ablaze in the harbor on their way back out to sea. From that point on, Roberts was known as “Black Bart” and had earned himself the bonified title of a true pirate captain. But despite his violent successes, it seemed his adventures in the art of war were only just beginning.

Although Roberts could have stepped down at this point and still have arguably been one of the most financially savvy pirates ever, he was not even the least bit interested in retiring from his prosperous new profession. He set sail from Africa, crossing the Atlantic Ocean where he soon happened upon a Portuguese Treasure Fleet in Todos os Santos bay, clearly carrying the riches of a great kingdom. The convoy was grand in scale–42 ships overflowing with gold and silver from the New World–a veritable jackpot for pirates.

But how to access the treasure? There was no way to tell which craft was carrying the booty, not to mention the fleet was well guarded by two massive 70-gun Portuguese warships.

Roberts was clever, and he knew brazenly approaching a fleet of this size would mean certain death for his ship, so he hatched a plan that would allow him to infiltrate the convoy without drawing suspicion. He ran the Portuguese flag up his mast and approached from behind the battleships, falling into the mile-long formation. Once comfortable in the fleet, he identified the smallest ship furthest from the massive gun-vessels. He sailed up alongside as if to pass along a message, but at the last second, jumped onto the ship with his burly mates, overpowered the crew, and demanded information about the location of the treasure. Facing certain death, the Portuguese crew gave up the identity of the ship carrying the most gold. And Black Bart had his target. 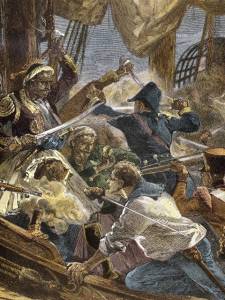 Turns out, the richest ship in the fleet was the Sagrada Familia, a vessel with 40 guns and crew of 170 men. Roberts, in his classic fashion, was undeterred by the possibility of failure and sailed right up to the treasure-laden ship in broad daylight, boarded the craft with his cutthroat crew and managed to gain control without ever firing a shot. To capture a ship of this size and value without killing a soul was basically unheard of and could only have been accomplished through sheer intimidation and fear (two of Roberts’ specialties)– a testament to how wicked and ferocious those savage pirates must have appeared to your everyday sailor.

Roberts ended up looting close to 80,000 gold coins from the Sagrada Familia’s hold and a diamond studded cross intended for the King of Portugal, which he wore from then on as a sign of his prowess.

At this point, around the year 1720, Roberts was at the height of his nefarious career and only gaining speed. He was a dashing figure in real life, tall with a swarthy, regal countenance, broad shoulders–a real lady killer–and the envy of any pirate with one good eye.

Roberts’ pirate ship Rover was his pride and joy, so when his second mate betrayed him and stole the vessel (along with much of the plunder) while Roberts was on a rogue mission, he was none too happy. It was then that Roberts created the pirate code to increase the allegiance of his men and establish a level of integrity. Angry but unfazed, he adopted a small sloop known as the Fortune and sailed out to seek more adventure.

Roberts did not know it, but the golden age of piracy was coming to an end, as vigilance and communication amongst seafarers was increasing, making pirates public enemy number one among law-abiding sailors. His rampant plundering and theft left much of the Caribbean in shambles, and the seaborne trade of the West Indies almost came to a standstill as a result of his criminal deeds. Although clever and brave, he was also dastardly, said to have hung the Governor of Martinique from the mast of his own warship once it was captured. If you were not on Roberts’ side, you were the enemy, and he faced the wide world with this belief. 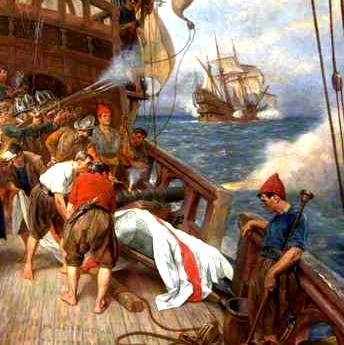 Roberts believed death should arrive in a blaze of glory, and that’s exactly what he got. Embroiled in a tactical battle with two other ships who had caught him unaware, and with a crew still half drunk from the night before, Roberts was killed by grapeshot which stuck him in the neck as he shouted maneuvering orders on deck. His men later honored his wish to be buried at sea, weighing his body down in a wrapped sail and throwing it overboard into the deep.

The pirate world was shocked by his death, as was the Royal Navy; they had all believed him to be an invincible hero who was larger than life.

The tales of Roberts’ piracy were so glamorous, so unfettered, they seemed to be more the work of legend than truth. But true, they were–well documented by history–and forever branded on the hearts of those who loved nothing more than a rousing pirate tale.